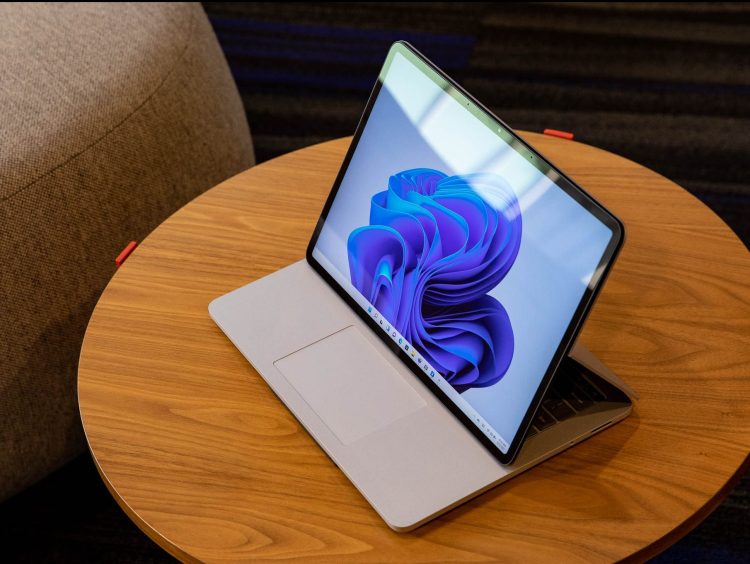 Alongside the new Surface Pro 8, Microsoft is introducing an all-new computer: the Surface Laptop Studio. It’s the successor to the Surface Book 3, but instead of featuring a detachable screen, it has one that flips into tablet mode. Where other 2-in-1s usually just go for a 360-degree hinge that flips the screen to the back, Microsoft’s system has it settling in on top of the keyboard. 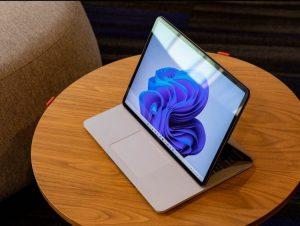 The Laptop Studio starts at $1,599.99, which is a premium price for what Microsoft is clearly positioning as a premium device. While it looks just like a MacBook when it’s in laptop mode, that comparison is mostly down to it being a very well-made device with silver, aluminum body. Once you start moving the screen, it becomes another kind of device entirely.

It’s a clever design that Microsoft has implemented somewhat more elegantly than we’ve seen on other laptops. Only somewhat, though: unlike the desktop Surface Studio that inspired it, the Laptop Studio can’t hold its screen up at any angle when it’s out of laptop mode. It can’t float out over the keyboard. You can only set it into three modes: laptop, flat as a tablet, or up in a kind of tent mode, leaving the trackpad visible. There are magnets in the laptop that help guide the screen into place.

None of that is especially weird, nor is Microsoft’s positioning of the Surface Laptop Studio somewhere in between major powerhouse gaming laptops and thin-and-lights. Let’s discuss the specs below, but they’re in line with what you’d expect the successor to the Surface Book 3 to have. What’s weird is the plinth. Perhaps “pedestal” is a better word. See, if you look at the Laptop Studio from above, it looks for all the world like a MacBook, right on down to the oversized trackpad that uses haptics instead of physical clicks to register your clicks. (One difference, I suppose, is that Microsoft made a good keyboard on the first try with the Laptop Studio.) But sitting underneath the standard-looking laptop part is a rectangular base that is narrower than the laptop itself. It is part of how the Laptop Studio kicks out heat, out of the sides of that plinth. It means that from the angle you usually see it, the laptop looks thinner than it actually is and like it’s floating a half-inch or so above the table.

One thing the inset plinth does is make space to store the new Surface Slim Pen 2. It can magnetically click in under the trackpad portion and charge there. The $129.99 Pen has a more tapered, sharper tip and also has some haptics. When you begin drawing on the screen, the pen attempts to mimic the drag you’d feel on paper. In my very short time with it, it didn’t feel very realistic, just a little vibration at the start of the pen stroke. However, there’s time for developers to update their apps with better support.

The screen is very nice. It’s a 14.4-inch touchscreen in a 3:2 aspect ratio — 2400 x 1600 pixels (201 PPI). It can reach a 120Hz refresh rate and of course, works with Surface Pens. Bezels around it are on the small side, and there’s a Windows Hello camera for logging in at the top — and Microsoft says it’s better at recognizing faces so they’re lit properly for videoconferencing. There are four speakers in the body of the laptop with support for Dolby Atmos. Which is quite loud with very nice stereo separation but not a ton of bass. Maybe more important to creatives is that Microsoft has finally begun supporting Thunderbolt on its Surface devices this year. The Surface Laptop Studio has two Thunderbolt 4 USB-C ports opposite the Surface connector and headphone jack. Sadly, there is no SD card slot.

The Laptop Studio can have either an 11th Gen Core i5 or Core i7 processor (specifically, the 35-watt i5-11300H or i7-11370H) and can either feature integrated Xe graphics or an Nvidia GeForce RTX 3050 Ti laptop GPU with 4GB of GDDR6 RAM. You can get 16 or 32GB of LDDR4x RAM and storage ranges from 256GB to 2TB. (Enterprise customers can spec an NVIDIA RTX A2000 laptop GPU with 4GB GDDR6 GPU RAM.) Those specs are another indication that this computer is part of the Surface Book’s lineage, aimed more at creators than gamers. Microsoft has put a lot of power in here but is directed at coders and creativity
[/vc_column_text][/vc_column][/vc_row]
close
Share this page! !